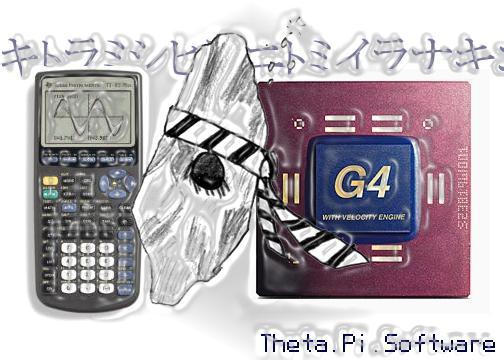 All programs on this page may be freely used. However, they are no longer supported, and you agree to use them entirely at your own risk.

- strips newlines from wordlists, intended for use in conjunction with MungePass. Javascript. Use Online

- The debug version of ASCIIWeb lets you see how the encryption algorithm actually works. Javascript. Use Online

- Similar in function to ASCIIWeb, but can encrypt lines of text significantly faster, making it feasible to use higher iterations. Also utilizes all ASCII characters. The .sit file contains both standard Perl files for use on *nix systems, as well as compiled MacPerl applets for use on the Mac.
Download .sit Download .tgz

- start from the command line, enter a string of text, and it displays the hex and ascii values for each character. Perl. Download

Theta Pi's set of tripwire scripts, FAMAE, allow you to periodically check the integrity of a variety of system files to ensure that they have not been modified by hackers or malicious programs. WARNING: you must be able to use the OSX Terminal to run these scripts. Also, these haven't been accurate since around OSX 10.3 or so.

Theta Pi's Incremental Backup scripts allow you to easily back up a project file to a new document every few minutes, so that you can save your file without worrying about losing your old revisions. WARNING: you must be able to use the OSX Terminal to run these scripts.

Version 1.5. One of Theta Pi's most popular programs, this script creates quick 'n dirty thumbnail galleries, which are mainly useful for on-disk image browsing and organization. The galleries are created by resizing the actual images into preview mode, so that they load immediately when clicked, but the broswer has to load all of the images for the preview page. It is recommended that IE be used in conjunction with this program, not because it's better (which it isn't), but because it caches pictures faster. Designed for OS9 or Classic environment under OSX.

Cryptogrammer is a program designed to automatically create cryptogram puzzles, similar to the "Celebrity Cipher" column in most newspapers. A letter-for-letter transposition code, you can solve a cryptogram with a letter-frequency table and a knowledge of grammar and common words. Cryptogrammer generates the cryptograms, along with a full equivalency table for including hints (i.e. A equals E). Also comes with Super Cryptogrammer, which also encrypts punctuation, and is useful for cryptanalytic programming exercises.

ASCIIEnc is a Macintosh conversion of the Theta Encryption System, with faster processing and increased security. This suite of programs allows you to encrypt with a 1 to 255-character passphrase, or a code block which can serve as a virtually unbreakable one-time pad. It also includes quick-encryption from the clipboard and direct-entry encryption in IRCle.

The program that started it all. Known as ØES, or the Theta Encryption System, it is the most sophisticated and feature-rich encryption program in existence for the TI-83 graphing calculator. It has four main modes of operation: Standard Encrypt, which is a relatively secure triple-transposition cipher, Simple Shift, a replication of Caesar's Code providing basic security, List Encrypt, a one-for-one transposition cipher, and Cryptogrammer, a Cryptogram creator.

RLPassword is an applescript designed to create natural language passwords. These passwords are nonsensical words, and so cannot be guessed using a dictionary attack, yet at the same time are phonetically memorable so you won't forget them. Here's an example of eight-character passwords generated by the program: emicemaw, evowinaw, idelufah, upodiwit, utinegym, enumigev, abetapid, and orilodek. As you can see, none of them are actual words, but they are much easier to remember than something like axzvkbvo or gzxtm4n.

Steg is designed to be an assistant to ASCIIEnc, but can be used for other purposes. It is designed to mask sensitive data by hiding it within application files, by utilizing the data fork that is rarely used in Classic Mac programs.

- put in chars, get back hex code. Applescript. Download

- A useful chemistry tool, converts between moles, grams, and number of molecules. Download

- A program for guessing the intersect of a function and its derivative. Download

- Allows you to use the arrow keys to position a text string on the screen, then prints out the coordinates. Useful for programmers. Download

- Prints all of the variables to the screen. Download

- Takes any integer up to 8191 and converts it to binary. Download

- A first attempt at an ALICE-like bot for the TI. Kinda lame. Download

- A program designed to tell you when, on an analog clock, the hour, minute, and second hands are perfectly aligned. Download

- a program designed to have the visual effect of waves if you unfocus your eyes slightly, like a "magic eye" poster. Download

- calculates distance of a line drawn between two points. Download

- game where you try to hit the number that flashes onto the screen as quickly as possible. Download

- generates tangent lines for a function for the given range of values. Download