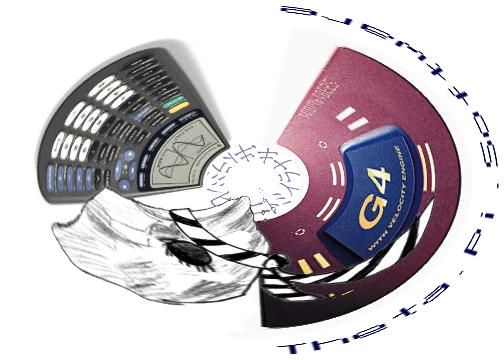 What is Theta Pi?

Theta Pi Software started up way back when I was in high school, programming TI calculators. In fact, it was in one of my high-school math classes that I originally came up with the idea behind the Theta Encryption System, a program for the Texas Instruments TI-83 calculator that enabled someone to electronically encrypt messages. I have always been interested in encryption, and I had noticed in the past that a variety of notes passed among the students were intercepted by the teacher, who would then read them aloud to the class, bringing a calculated amount of embarrassment to the originator. So, to prevent this, I decided to come up with a system of encryption. And, from that and other TI programs, Theta Pi Software was born.

I wrote a variety of TI programs (now available), from simple calculator-based games to helpful mathematical programs. It is only recently, within the past few years, that I have become involved in computer programming, and over that time I've worked in Applescript, Javascript, and Perl, and occasionally C++. At the moment, I am the sole programmer for Theta Pi Software.

What's with the name?

The Theta Pi name was originated based on the limited repertoire of the TI-83 text symbols. Initially, I wanted something that would look cool on a computer screen. I soon discovered that the only 2 special characters were a circular symbol and the symbol for Pi. Initially, I decided that the circular symbol was an Omega, and so the early programs I wrote referred to "Omega Pi" software. It was only later that I discovered the actual name of the character, and so it became Theta Pi software. Later, I tried experimenting with a variety of names, the best of which was probably Virtual Insomniac. This name occasionally appears in some of my products.

What's with the logo?

I recently had someone email me in a state of confusion, inquiring as to why the country of Taiwan appeared in the new Theta Pi logo. The drawing, in fact, is not of the country Taiwan, but a drawing I did of an organic computer character from the Tenchi Muyo anime series. As it is, the current logo took about 10 minutes to composite, and since certain companies could probably contest the use of their logos, alternate designs are being drafted.

Think you have an interesting design for the Theta Pi logo? Send it in.

What license are your programs distributed under?

None in particular, at first. That's essentially still the same, as everything is now released under the GNU General Public License. This means that you can do whatever you want with these programs, while ensuring that the code behind the programs remains free and accessible to anyone who wants to use it, and that the code is not aboused or restricted for a third party's commercial gain.

Why is everything free?

The primary reason that I have for writing programs is to solve problems I come across while using my computer. For example, CTGC was created to organize a digital image collection, AsciiWeb was created because I wanted a way to send email securely from campus computer labs without PGP, and RLPassword to create passwords that I would be able to remember. These programs were not designed to be commercial products, hence the limited GUIs and instructions - I am not interested in selling programs for profit. Rather, I am interested in creating programs to make certain things on the computer easier, and make them available to people with similar situations so that they can also benefit from these solutions.